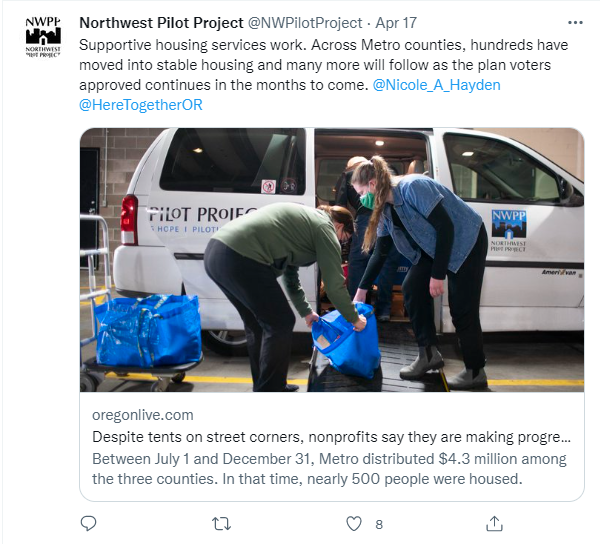 By Nicole Hayden | The Oregonian/OregonLive

Employees from Northwest Pilot Project load up food that will go to people transitioning into housing. The organization received about $650,000 from the homelessness tax as well as increased access to long-term rent assistance. They used the money to hire seven full-time staff members, bringing their staff up to 24 people.

Nearly two years after Portland-area voters approved an unprecedented regional tax to expand homeless services, thousands of people still live in tents, RVs and makeshift outdoor shelters, which has led some residents to question whether the tax has made a dent in the crisis.

During the first six months after tax proceeds began flowing, local governments and non-profits used it to help about 500 people move out of shelters or off the streets and into apartments, mostly by providing them with rental assistance, program officials say. The money has helped even more people move from homelessness to permanent housing since 2022 dawned, but those statistics are still being compiled, officials said.

Click here to read the full article on oregonlive.com

Nicole Hayden reports on homelessness for The Oregonian/OregonLive. She can be reached at nhayden@oregonian.com or on Twitter @Nicole_A_Hayden.