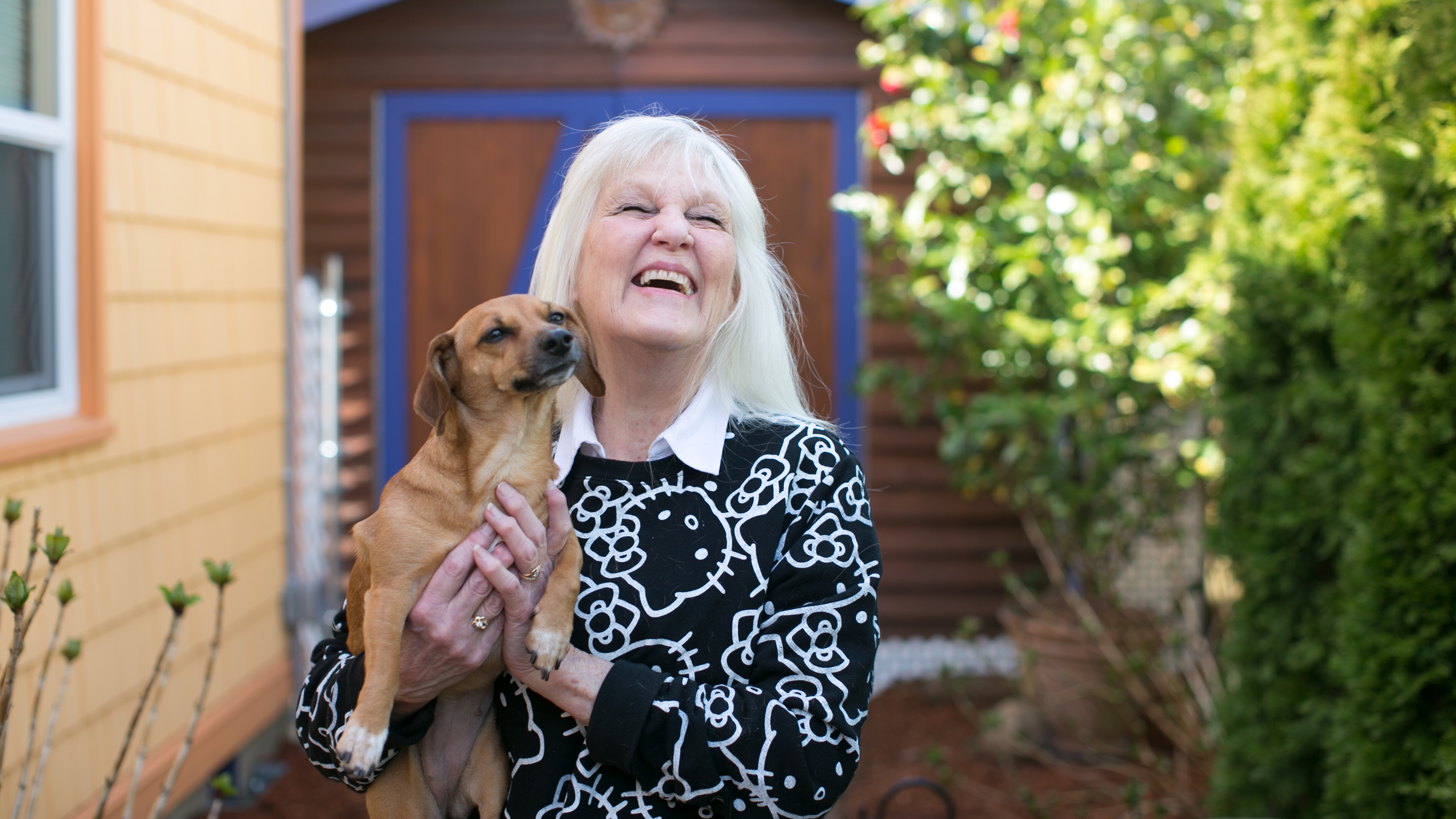 Multnomah County and its partners are changing lives, supporting thousands of households with rent assistance that either prevents or ends someone’s homelessness, the Board of Commissioners heard during a briefing Tuesday, March 12.And rent assistance, when applied in the right amount and in the right way, the Board learned, is one of the most effective ways to quickly help people escape homelessness and, often, never endure it again.

But, because housing costs have grown dramatically faster than incomes, need is still outpacing that progress. Right now, on any given night, 56,000 households in the tri-county region face homelessness(link is external) solely because they can’t afford the cost of rent.

“The need for rental assistance in our community continues to grow,” said Marc Jolin, director of the Joint Office of Homeless Services(link is external), “largely because the gap between what people have in income and what it costs to rent continues to grow.”

Without new local revenue to fill that gap — and a major federal infusion after years of disinvestment in housing — cost-burdened renters will continue to suffer from  Portland’s booming economy. And even if new revenue doesn’t come, providers, County departments and other governments across the region will need to coordinate their housing work more closely than ever before.

“We’ve done a good job of aligning homeless interventions” in Multnomah County, after creating the Joint Office with Portland and doubling the number of people sheltered and housed in a given year, Jolin said. “Now, how do we align our housing interventions?”

The gap between incomes and housing costs is growing ever-wider. That message was at the heart of a presentation on rent assistance programs(link is external) by Jolin and other leaders and experts: Peggy Samolinski, director of the County’s Youth and Family Services Division; Laura Golino de Lovato, director of Northwest Pilot Project;(link is external) and Ian Slingerland, director of homelessness initiatives for Home Forward(link is external).

Rents vs. incomes in the Portland region

Each shared information on the kind of rent assistance their agencies provide. Those offerings range from long-term federally funded vouchers that often serve people with disabilities, to a County-funded local voucher that keeps seniors housed, to short-term support that helps families pay for such basics as rent, utility bills and work clothing.

But community need, because of the housing market, has swamped the programs that government and nonprofits have established to help. And the lack of any meaningful federal response is glaring.

According to data compiled by Metro, average rents for one-bedroom apartments in the Portland region climbed 52 percent from 2010 to 2016. That’s more than twice as fast as growth in the median income for renters, who make up two-fifths of all households in the region. Those incomes climbed just 19 percent.

And that disparity is even larger for people on the margins of the economy, Jolin said. Incomes for people at the lowest end of the margin grew just 9 percent.

Nationally, from 1987 to 2015 the number of very-low-income households nationally grew by 6 million, a Harvard University study(link is external) found last year. In that same period, the study found, the number of households receiving federal housing assistance grew by fewer than 1 million. That means need is growing more than six times faster than the federal response.

“The result is what we see in our community today,” Jolin said. “It just shifts the responsibility increasingly to us.”

Each year the agency helps more than 11,800 households avoid homelessness by providing long-term rent help, at a cost of $103 million. Thousands more households are on waiting lists.

The average income for households receiving long-term assistance is just $12,500, said Slingerland, the agency’s homelessness initiatives director, and almost a third of those households are families with children.

Some of that assistance is tied to specific apartments and buildings designated as affordable. But the majority is awarded directly to households as a voucher that they can use to buy down rents on the open market. That allows households to choose where they want to live, but it also means they must navigate an increasingly cutthroat private market to find affordable homes.

And even with all of that federal spending, Slingerland said, local funding is key to ensuring families who receive federal assistance can stay housed. Federal funds are typically limited to rent costs, while local funds can help cover transportation costs and security deposits and allow people to settle old debts to past landlords.

“We have been very successful over the last several years in national competitions” for additional vouchers, Slingerland told the Board. “A big reason that’s true is because of our historic success aligning the rent assistance with other supports in the community and because of the willingness of local jurisdictions, including yourselves, to fund flexible resources.”

County creates its own long-term program

Last year, the County started funding its own long-term rent vouchers through a pilot project led by Northwest Pilot Project, a housing services nonprofit that specializes in helping seniors.The local voucher helps senior citizens on a fixed income bridge the gap between market rents and what they can afford to pay. The program serves 45 households — 11 of whom were experiencing homelessness when they were admitted. The average monthly subsidy is $750.

The program was designed with a simplified application process and the ability to accommodate more people and as funding allows.

For some households, a short-term boost is the only thing they need to help them keep or regain housing. It can ease them through a crisis like a job loss or sudden medical expense, or provide a few months rent while they rebuild their savings.

In the 2017-18 fiscal year, more than 3,000 households in Multnomah County relied on short-term rent assistance to avoid an eviction or quickly regain housing after losing it. That funding is managed by Home Forward, and comes not only from the federal government, but also the County, the City of Portland and the State of Oregon.That assistance is typically paired with other wraparound supports to help a household maintain stability. And while households can receive the support for up to 24 months, most use it for fewer than five.

Sometimes it’s “used as a bridge to longer-term rent assistance,” Slingerland said. But it’s also a tool for easing one-time housing obstacles, like paying for a security deposit or housing application fees.

Many families will need more help, and for longer, than short-term rent assistance can provide. But “as rents continue to outpace income,” Slingerland said, “it’s still an important component of our homeless prevention and response system.”

The County’s Multnomah Stability Initiative, managed by Youth and Family Services in the Department of County Human Services, plays a similar role. For some 900 families, the program offers not just housing help, but other supports to ensure those families thrive in their housing.

The stability initiative helps with housing costs, like rent and utility bills. But case managers can also invest in things like work clothes and transit passes, tuition and school books, fees for youth sports teams, and even family passes to museums or the Oregon Zoo.

“This program actually supports them doing that,” said Samolinski, the Youth and Family Services Division director.

More than 80 percent of the families served are from communities of color, who are disproportionately counted among people experiencing poverty and homelessness in Multnomah County. And more than 83.5 percent of all families served were stably housed a year after leaving the program.

“It’s really another example of how rent assistance alone, for lots of folks, isn’t enough to be successful,” Samolinski said.

Back into housing — and staying there

Other programs live within the Joint Office, most notably a partnership among several family-services providers called the Mobile Housing Team. The $4.9 million program is funded by the County and Portland.

The team works with families who contact 211info(link is external) for services. From there, housing specialists meet those families wherever they are — whether in a car, motel room or shelter — to learn what they need. Families are then placed on a wait list for housing that averages some 1,400 households at any given time.

As families’ names move to the top of that list, based on how vulnerable they are, Mobile Housing Team members help find the right housing for them. The team includes culturally specific providers, who can help navigate language barriers and better understand available community supports. he team also can help clients negotiate with potential landlords.If their client needs a new ID, the team can help.. If their client needs money for rental  applications or even paying down old debts and fronting a security deposit, the team can help. And after families are housed, the team continues to help with rent while ensuring clients can manage any hiccups or conflicts that could endanger their new housing.

“For some families, just the key to a place isn’t enough,” Jolin said. “We want to make sure there’s someone to support them, whether it’s a financial challenge or an issue with a neighbor or the landlord.”

Commissioner Susheela Jayapal, who requested the briefing, said she wanted more discussion about rent assistance, with particular attention on how the County and its partners could make up for the relative lack of federal investment.

“As much as we believe that’s where it should be coming from, that’s not going to happen,” she said. “So this fits nicely with one of the next steps: what are the revenue sources, because we’re going to have to figure this out locally.”

Chair Deborah Kafoury reminded her colleagues that it’s only been a few years since she and her fellow commissioners joined with Portland leaders to create the Joint Office and dramatically increase local spending on homelessness services.

Going forward, Kafoury said, that coordination should expand across all of the County’s work to promote housing and economic stability.

“We were really in a crisis mode,” she said. “Now that we have a moment to breathe, we’re looking at the next iteration and where we go from there. This will be about housing. Having better coordination between all of our departments? We’re starting that conversation.”